Twenty digital champions met in Auckland yesterday to progress Auckland’s digital inclusion agenda.  The lunchtime meetup was convened by the 2020 Communications Trust in partnership with InternetNZ and chaired by Michael Howden, 2020 Trustee.  It included education providers, community organisations, IT suppliers and the Auckland Council.

A Digital Inclusion for All draft plan was tabled to stimulate discussion; this proposed a focus on southern Auckland to align with one of Auckland Council’s strategic priorities – The Southern Initiative (TSI).   But it was agreed that this should just be a start as there are also significant digital inclusion challenges in other parts of Auckland, especially west Auckland.

It was suggested in the draft plan that solving some the human challenges identified in the recent Auckland City Mission research report on what keeps people in poverty could provide a focus for a digital inclusion strategy. Some concerns were expressed that the draft plan focused too much on access issues – digital devices and UFB internet connections in homes.  Are access technologies really the barrier? Should we focus on household connectivity or personal digital connectivity for citizens?

It was suggested that a greater focus on how the technologies can be used for learning and innovation would not only increase digital inclusion but also lead to  job creation and economic growth.  This was illustrated by one meeting participant who quoted an example from his organisation.  The 50 Maori and Pasifika boys living in the InZone

hostel in Epsom all received a personal tablet device earlier this year thanks to a generous grant from the Vodafone New Zealand Foundation; the boys initially used the devices for playing games but quickly discovered how they could also use them to advance their education.  It took an inspirational visit from a second-year university student to introduce the boys to the amazing world online learning resources such as the Khan Academy.

The meetup acknowledged one of the challenges facing Auckland is in aligning the many different digital inclusion initiatives; there is no single place where communities can go to find out what is already happening and how they can engage.  It was suggested a stock-take of digital inclusion initiatives would be a helpful initial step*; while this acknowledged that was not a new idea and had been undertaken in the past, a new approach using social media tools and user-generated content could result in a more dynamic and up-to-date resource.

The group agreed to join a Meetup Group to continue the discussion and plan another face-to-face meeting in October.  Groups with an Auckland digital inclusion agenda are welcome to contact the 2020 Trust to join the Group and participate in future meetings. 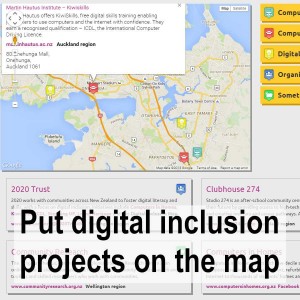 Update 8/7/2015: 2020 have created a prototype Digital Inclusion map that can be used to record digital inclusion initiatives and locate them on a geographical map.  The map needs populating – please add any initiatives you know of that are not on the map – and support and development partners, so that the map is owned by stakeholders. Please Contact Us if you’d like to be part of this initiative.