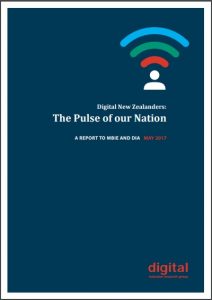 “Families on low incomes, seniors, and people living outside urban areas are becoming increasingly disenfranchised by lack of access, the inability to afford the internet or a lack of skills or motivation to be digitally capable.

The report says “There is a growing inequality whereby people are digitally excluded due to issues such as access and proficiency with digital devices.”

“This report was a very low budget literature review. It‘s a good foundation but this Government intends to do much more so we can find real solutions for real people.”

The report sets out the need for a single, nationwide policy framework on digital inclusion in New Zealand with input from digitally disadvantaged groups and informed by robust economic data.

“We know not all New Zealanders are participating equally in the digital world – and we need to better understand why that is, and what solutions may be effective in changing that,” Ms Curran says.

“determine what works…make it happen”

“We don’t have to reinvent the wheel and have only to look at the international examples in this report to see what is in train and working around the world. We need to determine what works specifically for us and make it happen.”

This report, together with other research and data that is currently available, will be a valuable input to the development of the new government’s blueprint for digital inclusion which we will be developing with the assistance of a soon to be established Advisory Group.

“The group will help us explore the complex but fundamental issues of how we can reduce the gap between the digital ‘haves’ and ‘have nots’ and will help determine what skills Kiwis need to be ready for the jobs of the future,” Ms Curran says.

A full copy of the report is available at http://www.mbie.govt.nz/info-services/digital-economy/documents-and-images/digital-new-zealanders-the-pulse-of-our-nation-may-2017.pdf

The report looks at four main areas, and makes 23 recommendations to address issues and opportunities, to help inform MBIE and DIA’s next steps with the Digital New Zealanders part of the Digital Economy Work Programme:

The research was commissioned by MBIE and DIA and was written by an independent digital divide/digital inclusion research group that included (among others) 20/20’s Laurence Zwimpfer and Barbara Craig, and Catherine Cotter who subsequently became a 20/20 Trustee. Published in May, the report has been released by the new coalition government.

The Minister’s media statement is at https://www.beehive.govt.nz/release/%E2%80%98pulse-nation%E2%80%99-report-exposes-digital-divide