Guest blog: Bill Dashfield looks at the 2018 New Zealand Census, teases out some reasons for the low response rate and suggests fixes. Ironically, the 2018 Census process prevented him from filling in his own census form online…    This article expresses his personal views.

The 2018 ‘Digital First’ census has seen

Some real advantages for online

There are advantages to an online form over and above the lower cost; a well designed form that works with reader software can be easier for people with visual or some physical disabilities; it can take people through a process step by step, warning them of missed questions for example; it allows more predefined answer options than can be can accommodated on a paper form; it can be faster and more convenient.

But… 82% increase in non-respondents

Despite a long gestation period, considerable testing and considerable effort and investment in outreach, the digital 2018 Census did not run smoothly. Leaving aside organisation problems like letters not being sent early enough, the switch from census takers calling at every dwelling to being ‘digital first’ caused multiple issues. The most important result is contributing to the response rate dropping from 94.5% in 2013 to ‘at least’ 90% in 20181.  Yes, response rates have been dropping for twenty years, by about 0.9%  per census; the ‘online by default census’ did not reverse the trend but increased it five-fold.

This is drop is serious and important2: government funding for social and other services is being increasing targeted to the groups in most need, and planners need good data on them, despite many of these groups are the hardest to reach by online methods3.   Stats will use statistically valid imputation methods to improve the coverage / response rate but this is not ideal.

There are multiple reasons for the drop in response, and Department of Statistics will be doing a full independent review to identify them; this will doubtless greatly improve the next census as the Canadians did to go from a disastrous 68% in 2011 to a world-leading 98.5% in 20164.

However as someone experienced in testing, online surveys and accessibility, I found some of the problems obvious and foreseeable5.  Here is my take, as an outsider, on some things I think went wrong, and how to avoid them in future: 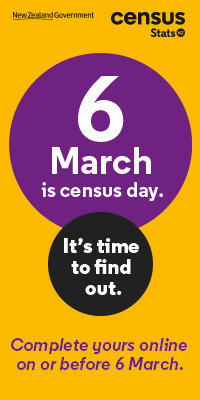 The Census was not properly accessible (paper and online).

The first accessibility test I do is for adequate contrast between text and background. This is vital for people with poor eyesight; the international standard is for a contrast ratio of 4.5:1.

The Dwelling Forms had small text in orange) which failed this: orange/white was 3.2:1. The purple/white of the Individual Form passed online, but the downloadable sample print form failed.  As the Census website is no longer available, I can’t do a full accessibility check.

Stats tests of the forms6 seems to have focussed on usability rather than  accessibility for the disabled, and on the questions rather than the process.

Jonathan Mosen, a blind man with a Master’s degree who runs an international consultancy on technology for the blind and an internet radio station, hit another problem He was unable to access the online survey – despite  all his knowledge, skills and equipment. The access code letter could not be read by his scanner7.

Accessibility testing of the whole process should have picked up these and any other issues.

The online process were not flexible enough, and simple improvements were missed.

In my case, I filled in the Dwelling Form in advance online, as I was going to be away on the Whanganui River on a 3-day camping trip, followed by 2 weeks touring. So I listed myself as ‘away’ on Census Day. The online Census application then refused to let me fill in my Individual Form in advance – it was expecting me to do the form in another ‘Dwelling’. But my tent had not been sent a code….

And although I could request paper forms via the internet, there was no option to download them to print them off. Instead, you have to wait for them to arrive in the post, which is slow, not delivered every day and would arrive after Census Day.

And although the Individual Form allowed you to say where you usually lived, the Dwelling Form did not. Thus a group of families on holiday in their internet-connected motorhomes will each appear to be living in a single room mobile dwelling at a road end  rather than their three- or four-bedroom houses.

The helpdesk staff were inexperienced and not properly briefed.  The FAQ was fairly superficial.

As the FAQ did not cover this (though more FAQs were added after Census Day), I rang up the Census Helpline, who offered to send someone round to the Whanganui River campsite with a form, as there was no internet access there.  When I explained this involved 3 days in a kayak or one day in a jetboat, she agreed this was not a sensible option.  She then suggested that I (and my wife and overseas guests) could just not take part.  I objected to not being counted. Eventually, after another call, the obvious suggestion of posting the forms to us to fill and return after our trip was made, which we did.

Apparently the 5 motorhome families had contacted the helpdesk too, and got 5 different answers.

All this could have been avoided by 1) thinking through and role-playing the possibilities 2) covering them in the FAQ 3) better helpdesk staff with better training and 4) having downloadable forms or emailable forms and/or access codes instead of a fallback dependent solely on snail-mail and field officers.

The push for ‘Digital First’ was too strong; it was not easy enough to get paper forms or assistance.

The access code letter sent to households made it very clear that you were expected to fill it in online. To get paper forms you had to find the small, un-obvious number on the letter, call it, and wait, and wait…

For something as important – and a legal requirement – as the Census, this is making it too hard.  Make the online way the easy way, but always allow another way for those not online. Paper forms should have been included in the letter, which could also have included a local place to get help with online or paper forms – for example trusted local groups, libraries, CABs, community centres.  Stats made a good start on this by engaging with over 1,000 organisations and 400 events8 to ‘promote the benefits and value of completing the census’, and at least some of them offered assistance too.  This needs to become the norm for the next Census.

We must avoid ‘online only’ situations, or we discriminate. This has happened in the UK , where Age UK has found that 41% of councils insist on online claims for two key financial benefits for older people9; a third of them (14% of the total) did not even offer assistance to do this. This led to calls for a legal right to use off-line methods.

The different user experience of paper versus online was not fully appreciated.

Forms on paper have a number of advantages that online forms lack:

Plus of course the paper forms used to be delivered by someone who could explain them and help you to complete them, if you wanted.  (This was only initially offered in a small number of New Zealand locations in 2018.)

Some groups were alienated by the pre-set answers not including them.

There has been a lot of comment about the only gender options being Male or Female, Pakeha not being an ethnic group etc.  You can scrawl your own answer on a paper form; if an online form doesn’t allow ‘Other’, your only options are to ‘lie’ or not take part.10

‘Data quality’ does not consist of forcing all answers to match a small set of arbitrary values; it consists of answers that reflect the true situation of the individual, and a Census where the greatest number possible of New Zealanders have responded.

As well as possible lack of privacy from using public computers, there are concerns that that assurances about sensitive data handling may not be totally correct11 and some access codes were incorrectly delivered giving people access to other households’ data12.

However, a key issue with many of the hardest to reach groups is that they are distrustful of authority and not confident with technology. Often the best way to reach them is to work through local organisations and people they trust (Wellington Downtown Community Ministry’s work with the homeless is a great example 13 ), who can meet them face to face and guide them on their way, whether it is to fill in a Census form that will help get resources targeted where most needed, or to equip them with computer skills, confidence and home internet access (as 20/20 programmes, when resourced, do). Only once they’ve got those skills, confidence and access can they interact online with the Census and other services.

The testing was fragmented, not ‘whole process’ and didn’t include all the right groups.

The 2018 Census problems have been years in the making, and I suspect many of them come from an underlying push to go online to increase efficiency and reduce government expenditure rather than to improve the way the Census serves New Zealand citizens.

Bill’s knowledge comes from being an Internet professional with over 20 years experience in online surveys, online usability and accessibility; and as a worker and activist reaching offline New Zealanders with digital inclusion and digital literacy programmes.

This article expresses his personal views. Follow Bill on @BillDashNZ.

Bill has been working in IT all his life and for community ICT and digital inclusion since the mid 1990s. He has carried out surveys and research into ICT for 20/20, government, business and for a Master in Information Management (VUW*) and has been (at different times) sponsor,  volunteer, Trustee and contractor for the 20/20 Trust; NZ web master strategist, marketeer, training manager and customer support for a top 3 global IT company; web developer, quality control, accessibility and usability assessor.

Whilst managing CommunityNet Aotearoa in the mid 2000s for the Department of Internal Affairs he was part of the working group on the whole of government New Zealand Digital Strategy, advised on community IT project proposals and received an online accessibility award.

He is passionate about web accessibility, working with AccEase to supplement their team of disabled testers with technical accessibility / usability assessment and expert analysis.  He also organises NetSquared Wellington, a monthly meetup group for community organisations and change-makers using technology for social good.