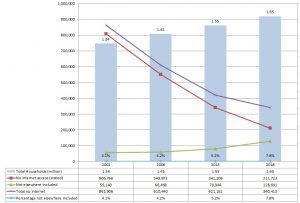 The first results from Census 2018 were published today, and we have done some initial analysis of  what they say about Digital Inclusion in Aotearoa.

The good news is that the number of digitally connected households has increased by 185,000, and 1.3 million now have an internet connection.  Enthusiasm needs to be tempered by two other changes since 2013:

This second category (“unidentifiable and not stated”) has been relatively stable in previous years.  The substantial increase in Census 2018 – to 7.8% – may be related to the high rate of non-participation arising from the introduction of the digital first census.

Taking these two factors into consideration, the net change of only 81,000 over five years suggests that the remaining households will be particularly hard to reach.  We will be doing further analysis as more data is released by Statistics New Zealand.

The Pulse of our Nation report highlighted the seven groups most at risk of digital inclusion:

These groups are also high users of government services, and it is increasingly apparent that government investment is needed to ensure digital inclusion for everyone in New Zealand.